In this experimead, the use of acid blend is tested for its flavor and aroma contributions in a dry short mead. The acid is added to a 5.5% cream soda, bottle conditioned, short mead. Triangle tests are conducted to see if participants can correctly identify the difference between the two meads. Correct respondents also provide feedback on the differences perceived in the two meads.

The base recipe for this experimead starts with the Psychopomp Recipe Clone from Havoc Meadery. I modified the recipe according to my taste. I uses 2 kg of frozen Polish fermentation cherries, and used the TANG nutrient profile. After fermentation I also modified the recipe by adding Costco Vanilla extract, and bottle conditioned to 2.3 vol. Some of the bottles were given acid blend additions and some were left as is.

This stuff is great. Despite the high fermentation temperatures, the mead came out really clean. The phenolic of the yeast were present, but it added a malty character. It tastes better than a cream soda, but you can drink it all day, because it is dry. I had originally left some without vanilla and acid, but it was kind of boring. Cherry doesn’t taste like cherry without acid. I ended up opening up the remaining bottles and adding the vanilla and acid. The batch also went really fast. I was happy with it and made a lot so gave most of it away. I will be making this recipe again!

Tests were evaluated when the meads were 2 months old at the Toronto Brew Slam Competition Canada’s largest homebrew competition. Participants were given a score sheet that asked participant to identify the odd mead out. Participants were asked their experience level with meads, how blown their palate was, and a their status as judges and home/professional brewers. If participants were correct, they were asked to say which mead they preferred and provide some comments on overall impression, aroma and flavor characteristics of the meads.

There again seemed to be some discrepancy between being able to identify the odd-mead out and experience level with the meads. Also, the evaluations were done during the second break on the second day of the competition (after IPAs were evaluated) so those with less blown palates (Palate=1-3) seemed to be able to be correlated with being able to identify the odd-meads out.

Most importantly, the six correct participants provided tasting notes of the meads. They all identified acid as the characteristic difference. Acid seemed to provide more berryness, more complexity, mouthfeel, cleanness, and brightness. 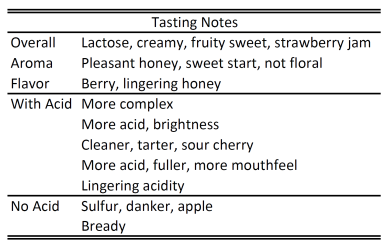 It was a lot of fun to do this triangle test, and it was great to get so many BJCP judges. There is not much of a familiarity of short meads, and showing off a 5.5% dry mead that people liked was a novel experience for most participants. While the p-value from the ability to correct identify the meads was not significant, I found it more interesting that those who correctly identified the meads all preferred the meads with the added acid. Beer judges are often looking for bitter-sweet balance and the acid-sweet balance that are so important in meads and ciders are often foreign to them. Acid is more than ever an important part of my toolbox.

I’ve participated in a few of Stephen’s triangle tests and structured mead tastings. I can attest to the rigour of his method and his data collection process. The high quality of Stephen’s base meads are the result of his attention to fermentation process, staggered nutrient additions, and yeast health. With regard to this experiment, the effect of acids in other alcoholic bevarages (see Cook’s Science, May 2017) has previously been substantiated. The experiment has demonstrated that acid blend additions can result in flavor enhancements in meads and melomels, particularly as it relates to the perception and character of the fruit.