In this experimead, a high mineral versus low mineral content is tested for its flavor and aroma contributions. This was tested in a traditional dry 9.5 percent ABV orange blossom carbonated mead.

As far as I know, this is the second triangle test of water chemistry in meads. The first was the experimead: Mead Water Chemistry: High Chloride to Sulfate Ratio.  In that experiment, the treatment was a higher Chloride to Sulfate to Ratio of 5/3 and levels with 150 ppm Chloride. The salts were added to a 7% ABV cherry and apple, bottle conditioned, short mead. However, in that experiment tasters were unable to significantly distinguish between the two meads, despite the fact that 5/6 people who correctly identified the mead preferred the meads with the mineral additions. In the discussion of that article, reviewers Jon Talkington, Peter Bakulic, and Tom Repas all agreed that the experiment should be performed on a dry short traditional mead. That is exactly what this experiment does.

The only other research on this topic, which I highly recommend reading, is the article “Influence of Water Chemistry on the Fermentation and Flavor Profiles of Traditional Mead” by Aaron Kueck. Aaron, tested water profiles both before and after fermentation and the flavor impact. What I find fascinating about this study is that the final water chemistry does not perfectly correlate with the initial water profile. It raises interesting questions on how nutrient additions build the water profile.

The calculations were completed using John Palmers water profile calculator. The mead fermented on water that was distilled with added salts and had the following mineral profile.

Post fermentation, the batch was split. One batch (baseline) was left as is. The other batch (treatment) was given the following minerals Gypsum at 0.076 grams/liter and Calcium Chloride at 0.181 grams/liter, to reach the final profile:

The treated water profile had a higher Chloride to Sulfate to Ratio of 2/1, levels associated with the NEIPA style. A high Chloride to Sulfate ratio is often used in these beers to promote a rounded malt flavour and emphasize the juiciness of hops and esters. In contrast, a higher Sulfate to Chloride ratio is often used to increase the perceived hop/bitterness character of a beer in west coast style IPAs.

The salt additions were very similar to the first experimead on water chemistry High Chloride to Sulfate Ratio.

This was a very good mead. No notable alcohol or heat. Had a bit of a malt character from the D47 yeast that clashed a bit with the orange blossom honey. I want to like D47 and have given it so many tries, but I prefer other yeasts.

Liked it better when the FG was 1.002. Next time I wouldn’t add the oak during fermentation but would wait untill the end as all I got was a bit of tannin but no notable oak character.

Tests were evaluated when the meads were 4 months old in a controlled setting with the Kingston area homebrew club, KABOB. Three triangle tests were conducted in succession. Participants were asked to identify the odd mead out in a triangle test. As mentioned participant knew that the triangle test could have been high versus low pitch rates. They completed this test first out of three triangle tests.

The meads were poured 50-50 between two groups of cups that looked identical except for a sticker of a black triangle on the bottom of one set of cups. No sticker was placed on the other cup. Just over 1 oz was served in 8 oz red plastic solo cups. Randomly, half of participants were given two cups with the treatment, half were given two cups without treatment (as well as the other mead). Every participant was given the following survey sheet.

There were 13 participants. Out of the 13 participants, only 6 were able to identify the odd mead out. A test that the results were from random guessing fails to be rejected with a p-value of 0.241. Of the 6 that identified the odd-mead out, 5 preferred the water treatment and the other preferred the original water profile. A test of the preferences being equally split randomly is rejected at a p-value of  0.109! Here is a summary of the results:

Where the treatment is mineral additions. More experience with meads and less blown palates was associated with higher success in the triangle tests.

Experienced homebrewers did about average. 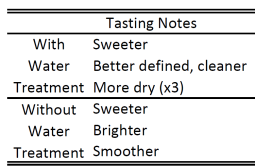 The only consistency I can find is that the mead with mineral additions as dryer. I got it correct in all my triangle test, but it was subtle, more rounded for me.

Darn! So much work, but the difference in the two meads was too small to pick up with the small sample size. For this water chemistry experiment and the one for the melomel (High Chloride to Sulfate Ratio) it seems that if participants could tell the difference they preferred the mead with slightly more minerals. I believe it was subtle because the baseline water profile still had a reasonable amount of minerals and also had a chloride to sulfate ratio of 2/1. This is really an experiment if you should bother adjusting up to beer like levels of minerals. I still might, but maybe drop the sulfate a bit.

Okay couple of things jump out here at me.

Did you make an untreated control batch for comparison? I didn’t see it anywhere in the write up, and I could have easily missed it.

Giving information to the tasters for the triangle test, automatically introduces bias, and compromises the Integrity of the test.

I like that you’re experimenting with water profiles, and that you want to share the information. I think it would be great to see this test done again with an unadjusted control batch for comparison to the batch with the pre fermentation water adjustments, and for comparison with the post fermentation mineral additions. I’m not sure I understand why there are mineral adjustments after the fermentation, unless you’re just experimenting with adding additional flavors, or characters. You’re not really making any adjustments to the water at that point, only to the finished Mead.

I don’t know if I recommended to you or not, if I didn’t then I highly recommend John Palmer’s book on water chemistry. I think there’s a lot of useful information in there that would answer a lot of questions you have, as well as giving you ideas on where to hop off for Mead. The book is written as a base for beer brewing, but the concepts are solid none the less.

I’m curious about your observation that D47 imparts a malty flavor to your Mead. I doubt that the flavor you’re getting is from the yeast, as it would be more estery or phenolic, fruity, and Floral. This is the problem with adding Minerals post fermentation.

I think this is good information, and will get a lot of people thinking about water, and how it affects their Mead. Thank you for sharing, and keep experimenting.

Thank you Peter for your thoughtful review.

The batch was split post fermentation and additional minerals were added to the treatment batch. I added some more clarification on this (baseline vs treatment)  in the text.

Regarding, the potential bias due to telling tasters what the treatment is. Tasters were still blind to the meads once they are in front of them. The statistics do not require the assumption of blindness of the treatment, only blindness for the three meads when they are in front of them. However, I do find this interesting and am planning an experiment where I run a randomized control trial where half the participants are informed. Stay tuned.

I agree that pre-versus post fermentation additions are an interesting variable. However, it is totally valid to adjust water profile post fermentation. I do it for beer. I could have also done the experiment with the split before fermentation. Different test I’d like to do some other time.

John Palmer is for sure the expert on this topic. I talked to him about it at Brew Slam 2019 and he admitted he had no idea what a water profile should look like for mead. He also seemed not to know that people often use KPH03 to help the PH during fermentation not drop too much.

Regarding the yeast character from D47 being malty. AJ from Gotmead came up with this descriptor when doing side by sides for the Great Canadian Short Mead Yeast Experiment. Its stuck in my head. There is definitely a notable D47 yeast character that some would describe as crackery/malty/sweet.

If I was going to make a scientific experiment for testing the water chemistry of mead in order to test the affects of mineral profiles on flavour and aroma. I would do the following:
I would have several varieties of water being tested:
1) Distilled as the control variable
2) Higher ratio of sulfate to chloride
3) Higher ratio of chloride to sulfate
Materials: honey, water, yeast, nutrients, and the minerals needed.
Methodology:
1) 3 separate meads are to be made that ferment to 6% abv (1.000 or less)
2) Bottle the batches (they could be still, or carbonated, or split it up to do both?)
3) Run a triangle test.
I think that if you’re going to test for something that is subtle (water chemistry) to taste, then you need to eliminate anything that could distract from perceived differences of what is being tested.
I like the idea of testing water chemistry in this sense because it is something that I adjust with my mead fermentations.

Thank you for your review. I agree that distilled water as the control variable would be a useful water test. I also think that it might also matter if a rehydration nutrient and a nutrient that includes minerals is used (for example fermaid-k vs fermaid-o which has and does not have minerals, respectively). The last water experiment I did tested the higher ratio of chloride to sulfate vs a low mineral content mead in a hydromel. The reason I avoid doing three meads at the same time is that you end up having to do 3 triangle tests (1-2 1-3 2-3). I also find the water treatments post fermentation to be a very clean test, as the fermentation was identical between baseline and treatment.